Festiva in the Park: Day 13

Last night's hotel was the nicest of the trip so far. Once we had our breakfast and packed up the car we hit the road for our next destination... Yellowstone National Park.


Our first stop was the Midway Geyser Basin. There are a number of geysers and springs at this spot, the main ones being the Excelsior Geyser and the Grand Prismatic Spring.  Excelsior was once the largest geyser In the world. However, the last known major eruptions occurred during the 1880s, when there were numerous eruptions up to 300 feet. The violent eruptions of the 1880s may have caused damage to the siliceous sinter lining, allowing gas leakage and the loss of thermal energy. No observed eruptions were known until 1985 when it erupted for two days. However, it only obtained a height of 20-80 feet. Excelsior is now a productive thermal spring with temperatures reaching199°F and presently discharging 4050 gallons per minute.


The Grand Prismatic Spring is considered the third largest in the world, after two larger ones located in New Zealand. It's cooler than Excelsior with temperatures ranging from 142-160°F.

Next stop on our drive through the park was the visitor center and Old Faithful. Our timing worked out very well as the benches around the geyser were starting to fill up in anticipation of the next eruption. We only had to wait about 10 or 15 minutes and Old Faithful didn't disappoint. One of the rangers told us that we were treated to a "blow" of about 140 feet, well above the average of 130 feet. 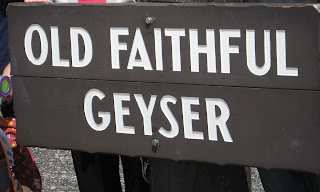 We spent a bit of time in the visitor center and gift shop, grabbed a snack and headed east. The drive both in from the west and out to the east is worth the trip by itself. Well maintained roads and a relatively low speed limit helped us to get the best gas mileage for the entire trip. Our route took us through Cody and then south to Worland where we would stay the night with our Festiva friend Jeff and his daughter. Arrived in Worland at 6:00pm, right on schedule, and enjoyed a great meal. Spend the rest of the evening visiting with Jeff and K, as well his parents and aunt.

Tomorrow it's off to visit Buffalo Bill Cody!