A Festiva by any other name

May of us have nicknames for our cars and Festiva owners are no exception. Sometimes our cars are named by others, some names stick and others don't.

Here's a few of those names, and stories behind them, from friends in the Festiva community!


Ben in Kentucky:
It was my brother who named Frito. Shortly after acquiring the vehicle he was cleaning it out for me and found an empty bag of the Frito’s snacks in the interior. His brain connected that to the film “Idiocracy” in which one of the main characters names is Frito, and also features a white Festiva GL in a rather hilarious monster truck segment. I liked the name, particularly for its unique brevity, and for its similarity to the another white Festiva in the community called “Pedro”.
Barry Bluejeans was named after a plucky character in the narrative Dungeons & Dragons podcast, “The Adventure Zone”. The character starts as the butt of several jokes but goes on to become one of the heroes of the story. I thought the name was fitting for the little neglected blue car that I fixed up and became one of the best Festivas I owned.

Charlie in Arizona: Tweak, the name came from the fact that the car is strung out on meth (it's water methanol injected). Pedro came with a Mexican blanket in the back seat (which stayed with the car) and I just called it Pedro as a generic Mexican name; Virginia, because the car was purchased in, you guessed it, Virginia.

Bryan in California: ... my little girls called it the little car the day I brought it home. Twenty one years later, the whole family still calls it that. I bet half of the them don't actually know the real name.

Rich in Iowa: The only thing my Festiva was called was the Silver Bullet. The people I knew that saw me driving it said that's what it looked like.

Will in Kentucky: The JDMSTIVA got its namesake from its JDM / Bosozoku inspired visual modifications. Things like a sticker bombed fender, front mount oil cooler, and large exhaust extending well outside the body lines. As I switched to a clean rust free shell, I continued the build as the JDMSTIVA V2. While not all the visual mods are complete just yet, the build continues always with the JDM styling in mind. 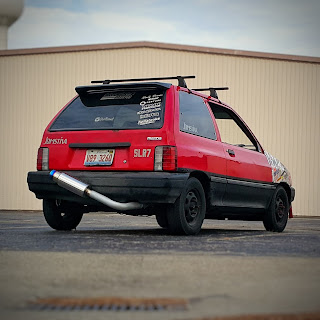 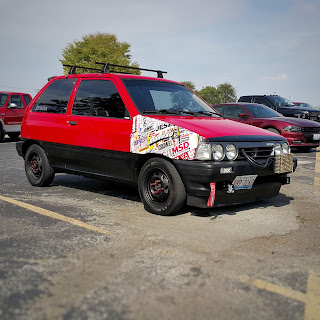 JDMSTIVA was featured in a Youtube video a few years ago! Follow this link to watch it!

Shawn in Tennessee : I drive a 93 Ford Festiva named Dream Chaser although originally white it is now green and black. I got this particular Festiva after the engine in my first one, named Phoenix, blew up! Before getting my 93 everything felt like it was spiraling out of control until I got Dream Chaser. This car brought me to the top. Three months after getting it from my dad. I met my future and now present boss Thomas Gabriel who is none other than Johnny Cash’s oldest grandson. After meeting him at my local town bar when he was playing one night I asked if he needed roadie. He said yes that he has been looking for one. So December 2nd he called me and asked how quick could I get to his house as we needed to leave the next day. I said if I can get $30 I can be there in a couple hrs. So if it wasn’t for my 93 Festiva “Dream chaser” I wouldn’t have been able to chase my dreams! To this day Thomas is still scratching his head about me making it 300 miles on $30!
We have given our own modified Festiva the name FASTIVA which is proudly proclaimed on the custom license plate! Others have come up with different names and my favorite of those is "Frank". The manager of a local auto parts store I frequent christened the car "Frankenstein", of Frank for short, due to the large number of cars that have donated parts to ours. How many you ask? You can find out in this blog post.
Other names I've come across are jelly bean, bumble bee, roller skate and when ten Festivas left the Wedge Pond day use area in Kananakis as part of Westiva a young girl was heard to ask "What's with all the clown cars?"!
I'm sure that the Festiva isn't the only car to get a nickname. Be sure to leave a comment to tell us your favorite car name story!
Posted by Ian Cassley at 5:20 PM