I've been involved in the Festiva community for almost twenty years and over that time I've met a lot of other owners, both locally and internationally. I've also had the opportunity to help some owners keep their cars on the road. I recently parted out a Festiva as it was beyond saving with rust having taken its toll. I asked its owner, Sara, to share the story of that car and here it is...

My younger sister (Jana) purchased the car in July 2013,shortly after she turned 16, from a guy in Calgary named James; she named it “Putt Putt” because of the sounds it made. It was just shy of 118,000 km and from what I heard, it was very lightly used and had just been sitting in a garage mostly

One time when she was driving our cousin home from school, smoke started coming out of the radio and they had to pull over and get picked up. Luckily it turned into nothing worse!

Four of our friends picked up the car and physically moved it because it was so light
Jana would take us to McDonalds at 2AM in it -- sometimes she would let me drive it there.
One time the brakes gave out while she was driving home from work. The brakes also gave out on me driving down Home Road and I thought I was going to die.

One winter, it snowed so much that no cars (not even the trucks and 4x4s) could get out of our cul de sac. Jana got Putt Putt started and just flew right over top of all the snow no problem.

After about a year, the maintenance cost became too high and she tried to sell it (with no luck). I bought the car from her in February 2015 in my second year of university (it was my first car whoo hoo!). I used it as a commuter car mostly driving to university and work. It always started shaking above ~80 km/h, so I was reluctant to take it on the highway.

I was always very excited to drive everyone around in it, but the people I was driving were always scared they would die in it (something about no air bags?). I saw most of the “downsides” as quirks. I loved the roll down windows, the fact that I didn’t always know if I would make it to my destination.

I got invited to Westiva in 2016 and made the trek to Kananaskis. My boyfriend and I got lost multiple times and I was definitely afraid that the car would not be making it there, but it did!

What I can say is that for both Jana and I, Steve at Silver Springs Auto, our AMA memberships and you were a saving grace time and time again. The car definitely showed the goodness in people, from having family and friends pick me up to people helping me push it across a Superstore parking lot after the alternator died a week before Christmas in -30ºC (twice in one night!). Whenever I had to call AMA (Alberta Motor Association) and tell them the colour of the car, my boyfriend always liked to yell in the background “Rust with a little bit of blue!”

I was always boasting about how much I could fit into the car, including people and items. I moved my entire bedroom minus the larger items (desk, dresser, bed) using Putt Putt when I moved out. I once fit my entire team at work (6 of us) in the car to go get ice cream.

Someone apparently felt bad for the car one day and stuck a smiley face band-aid on it; that band aid stayed on for literal years 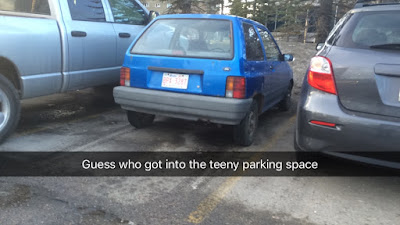 I also had fun making a challenge out of how small of a parking space I could fit into. It came in super handy, especially in the winter when there weren’t any designated parking lines.

I got a migraine one day when I was driving home, so I parked it and slept in the backseat -- comfiest sleep I’ve ever had in a car!

My mom always knew when I got home because when I turned the car off it would make this whistling sound.

Last summer all the transmission fluid came spilling out and it looked like it had been murdered brutally. I thought it was the end for the car, but a trip to the garage and a hefty bill later, it was all good to go again!

The CD player that was installed in it would eat CDs, so every year I would make a Summer Playlist that would stay in the car for the entire year until the next summer when I would use tweezers to pry the CD out and force the new one in.

Sara told me that "writing it down doesn't sound super exciting, but that she had lots of really great times in that car!" She's going to miss Putt-Putt but was happy to hear that parts from her car will help keep other Festivas on the road.

I mentioned at the beginning of this post that I was tasked with parting out the car. Over the course of two weeks parts from headlights to tailights and everything in between found homes on Festivas in Pennsylvania, Florida, Virginia, New Jersey, North Carolina,Tennessee, Kansas, Illinois, Alabama and Texas along  with New Brunswick, Quebec, Alberta and British Columbia.

Our first car usually provides us with memories and stories and we'd love to hear yours. Share them in the comment section below!
Posted by Ian Cassley at 6:00 AM