Our drive out was in surprisingly heavy traffic on the Trans Canada Highway west of Calgary but once we turned onto Highway 40 it got a lot lighter.

We were travelling with Jimmy Hawkins who had driven to Calgary from Macon GA. We were joined by Ryan and family just as we turned onto Highway 40 so the last 30km or so ended up being a three car convoy to the Wedge Pond Day Use Area.


We pulled into the parking lot at about 9:40 to discover that we weren't the first to arrive. Joe and his friend Brian from Saskatoon, Saskatchewan were there waiting!

We parked our cars and got set up with a couple of tables, claimed a picnic spot and waited in anticipation for our next guests to arrive. Next into the parking lot were Ben in his '93 named Frito along with Bob and his wife Shelly in her '91 automatic.


Ben, who hails from Lexington, Kentucky, was two-thirds into a 6000 mile, three week adventure. This current trip will take him through 20 states and three provinces. He met up with Bob and Shelly at their home in Pasco, Washington on the Thursday prior to Westiva and travelled together over the next couple of days.

Next to arrive was Calgarian Gary and his wife Bobbie in their 1990 Festiva LX. Gary bought this car brand new in 1990 and drives it almost every day. Being an LX it has all the sought after Festiva options available in Canada at the time. Gary has done a great job maintaining his Festiva saying the biggest challenge now is keeping ahead of any rust.

The Wedge Pond Day Use Area was much busier that it has been in past years. All that meant was that there were lots of people around and many of those stopped my to say hello and ask questions about our cars. Considering that Gary's was the only one of the seven of us that's bone stock there were lots of questions to be answered. Here's a brief rundown on the basic specs for each car that was in attendance. 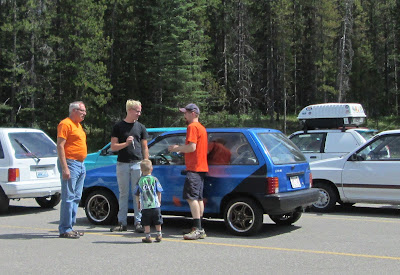 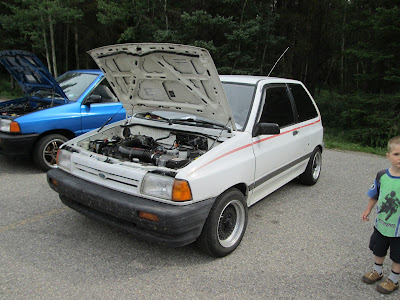 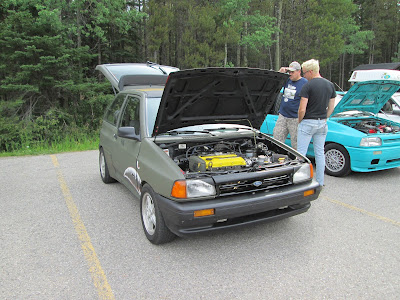 After entertaining all the curious bystanders and having lunch we drove the 30km to the Boulton Creek Trading Post for ice cream. The last 10 km of the drive are on a rolling twisty stretch of narrow two lane asphalt winding its way through the forest. Although the speed limit is a mere 50kph it is still a wonderful experience! After a quick stop at the Fortress Mountain gas station we arrived at Boulton Creek.


One of the highlights of the day was when a young girl asked her mom "Why all the race cars?" as we pulled into the parking lot!

One of the big advantages the Festiva has over most vehicles is its size, or more accurately lack of size. It makes parking really easy....


After spending some time beside the lake we made the drive home. Jimmy and Ben were staying at our place and Bob and Shelly decided to join us for the evening. Ryan and his family showed up a little later to do some emergency laundry... one of the boys got a bit to inquisitive at the lake! Wrapped the evening off with a BBQ supper before sending Bob & Shelly to their hotel in High River with Ryan and Julie heading home to the Edmonton area with their boys.

We ended up with five Festiva in front of our place... I wonder what the neighbors thought?
I would have to say that this has been the best Westiva yet. We had great weather, a wide variety of cars and lots of interest from curious on-lookers. We had a total of seven Festivas and one Suzuki Swift. Unfortunately there were two that I know of that were unable to make it this year. Two of our attendees came a long way to join us for the first time... perhaps they will have inspired others to make the trip next year.

So what is next? In the short term I intend to do a more detailed post on each of the cars and owners in the coming weeks. Longer term... the next edition of Westiva is scheduled for July 14th, 2018. It's never to early to start making plans!


Thanks for your continued interest in this madness! Your questions and comments are welcome, just leave them in the space below.

Just wanted to give a shout out to RockAuto.com. They provided a gift card along with some magnets and flyers to hand out at the event.