Westiva is very casual, informal event originally geared towards owners, fans and fanatics of both the Ford Festiva or Ford Aspire with invitations extended to owners of other econoboxes from the late eighties and early nineties such as the Dodge Colt, Chevrolet Sprint, Geo Metro, Suzuki Swift and Nissan Micra.

The "official" start time is around 10:00am. At about 1:00pm we cruise up to the Boulton Creek Trading Post in Peter Lougheed Provincial Park for ice cream, about a 30km drive. From there we'll continue to Upper Kananaskis Lake.

When Westiva was first held in 2008 there were four attendees. Two from Calgary, one from the lower mainland of British Columbia and the fourth driving up from Worland WY. Our best year attendance-wise was 2010 when we had 10 Festivas show up with the furthest being from Ontario.

In keeping with our expanded area of interest we had the owner of a Suburau Vivio RXR come to the 2012 edition. There was no event in 2013 due to significant flooding in southern Alberta

The 2014 event saw a couple of Suzuki Swifts in attendance, one from Calgary and the other from Spruce Grove AB. We also had owners bringing the cars from as far away as Pasco WA and St. Albert SK.

Last year's event turned out to be a cool and rainy one but in spite of that we had five Festivas make an appearance, myself and four other first time attendees! There was also a Suzuki Swift convertible to round out the number to six.

Here are a few more details including some reasonably close camping and hotels:

Campgrounds in the area fill up fast so I would recommend making reservations. Some campgrounds are first come, first served but others can be reserved 90 days in advance.
Mount Kidd RV Park  is the closest, and nicest, but there are a couple of other options that aren't too far away. Those would include Eau Clarie just south of the venue along with a number in Peter Lougheed Provincial Park. Another camping option would be in Bow Valley Provincial Park, about 40 minutes away on Highway 1 towards Canmore.
As for hotels the closest are located in Kananaskis Village, not far from Wedge Pond.
Calgary's western city limits are only about an hour or so away from Wedge Pond. There are a number of hotels on that side of town as well. If you search "Motel Village Calgary" you will find a number of places to stay that are conveniently located along Highway 1, the Trans Canada Highway, as it passes through the City. I live not too far from there so perhaps an early morning caravan could be set up to make our way to the venue. There are a couple of hotels right across the highway from Canada Olympic Park, the site of a number of events in the 1988 Winter Olympics. Those are the Sandman Hotel & Suites Calgary West and the Four Points by Sheraton Hotel & Suites Calgary West.

One thing to keep in mind that Westiva is held during Calgary's Stampede week and hotels could possibly book up fairly early in the year. I recommend booking sooner than later.


All of the photos below were taken at Wedge Pond day use area unless noted:


Looking forward to some long distance attendees this year! Festiva owners in Georgia, Utah and Kentucky have expressed an interest in coming up. If the exchange rate on the Canadian vs. US dollar stays anywhere close to where it is today it would make for an inexpensive trip!

Speaking of distances... if you're thinking of coming here are some approximate one way travel distances:

When: 10:00am Saturday July 15, 2017
Where: Start at the Wedge Pond Day Use Area, Kananaskis, Alberta
Who: Ford Festiva and Aspire fans and anyone interested along with owners, fans etc of other econoboxes from the era.
Why: Why not? There may even be prizes and trophies!

If you'd like more information either leave a comment here or check out the "Meets & Events" section at FordFestiva.com 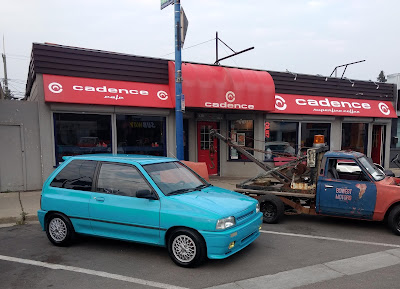